When I was a little girl, my mother had several pieces of African art in our house. One painting in particular showed a beaming, black baby with the words, “Black is beautiful,” painted next to her. Growing up, I saw this painting every day, and although I didn’t know it at the time, those words and the constant message of positivity were rescuing me before any calamity had come my way. At 9 years old, a boy at my school, a black boy, decided to play ‘The Dozens’ using me as his target. At some point in his little display, the words, “You’re so dark…,” came out of his mouth. I registered no reaction, mostly because I was truly confused. He tried again, this time with the words, “You’re so black,” but again, he got no reaction. What had happened was that I could not see his words as the insult he intended them to be because for me, the damage had already been done. That damage came in the form of the blows against the colorism and internalized racism that my mother had already struck because she knew I would face these forces as a dark skinned, black girl in this country.

After watching the film “Dark Girls,” I’m heartbroken at the thought that messages like the ones my mother gave me have not reached every black person in this country. Whiter skin color has always been seen as currency in this country and this currency still carries value, in that the lighter a person’s skin, the more ease that person is perceived to have to move and elevate him or herself in society.

But hearing the stories in “Dark Girls,” one is struck by the notion that this internalized racism goes much deeper than perceptions of economic mobility. Indeed, the attitudes of black people who are victims of this kind of post traumatic slave disorder seems to be that lighter skin, in many cases, simply makes a person better. Dark skinned women seem to possess, in a greater amount, the thing about black men and other black women that they hate about themselves, which is their very blackness itself. It is not difficult to believe that the energy trauma of slavery has imbued itself in the DNA of black folks, if we are to understand the very deep and long lasting attitudes about dark skin the film wants to portray.

Although she hadn’t reached the career heights she is now experiencing, Viola Davis’ presence in the film is important, as is her current success. As she says, she grew up not seeing any examples of women or girls who looked like her in the media, so her visibility itself could, for young, black women watching her career now, possibly be the thing that causes someone to put down the jar of Porcelana and pursue something else. It could also be a catalyst for young black men to shift their harmful, incorrect and delusional attitudes about the beauty of black women, simply because she is, now, being held up as a symbol of beauty and positive sexuality. 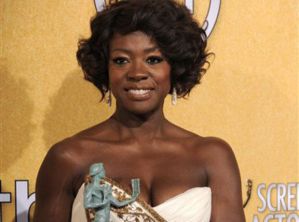 “Dark Girls” is the movie I wish were shown more on television instead of the current ‘mulatto follies’ on stations like BET. Strangely, as it stated several times in the movie, some white people seem to appreciate and find beauty in dark skin. As dark skin gets more positive, widespread media exposure, perhaps it will be these white people who will aid in helping some black people find and appreciate that same beauty. Stranger things, like racism itself, have happened.

Ayesha Nizhoni's blog for AS 325, Africana Studies and Film Major